Introduction to the Harmonograph 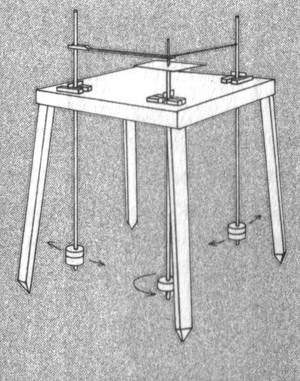 A harmonograph is a mechanical apparatus that employs pendulums to create a geometric image. The drawings created typically are Lissajous curves, or related drawings of greater complexity. The devices, which began to appear in the mid-19th century and peaked in popularity in the 1890s, cannot be conclusively attributed to a single person, although Hugh Blackburn, a professor of mathematics at the University of Glasgow, is commonly believed to be the official inventor.[1]

A simple, so-called “lateral” harmonograph uses two pendulums to control the movement of a pen relative to a drawing surface. One pendulum moves the pen back and forth along one axis and the other pendulum moves the drawing surface back and forth along a perpendicular axis. By varying the frequency and phase of the pendulums relative to one another, different patterns are created. Even a simple harmonograph as described can create ellipses, spirals, figure eights and other Lissajous figures.