This will be a quick post about the polarized film found in Backlight screens for the gameboy. There is a lot of information about it online but still some pictures don´t show very well the effect so I wanted to try and show it here.

In order for the GameBoy screen to show pixels, it is necesary a polarized film. Basically is a filter that allows just light in one direction. When you add a backlight to the gameboy you must remove some layers, one of them is a polarizer, so it’s mandatory to add another one.

Once you remove the layers of film in the original screen, we proceed to install the light and polarized film, as we can see in the pictures above, on the left the screen is white when no polarized is inserted (you wont see any image), the center image shows the polarizer in a 90 degree angle, becoming blue when the unit is off… and lastly on the right the normal position of the polarizer, which makes it look that nostalgic green we all know…

From the Wikipedia:
A polarizer or polariser is an optical filter that passes light of a specific polarization and blocks waves of other polarizations. It can convert a beam of light of undefined or mixed polarization into a beam with well-defined polarization, polarized light. The common types of polarizers are linear polarizers and circular polarizers. Polarizers are used in many optical techniques and instruments, and polarizing filters find applications in photography and liquid crystal display technology. Polarizers can also be made for other types of electromagnetic waves besides light, such as radio waves, microwaves, and X-rays.

There are basically two ways to use it in the Gameboy, one is let’s say normal the other one is inverted (90 degrees). The result is that the inverted becomes Negative… and increases contrast slighty in comparison to the normal mode. 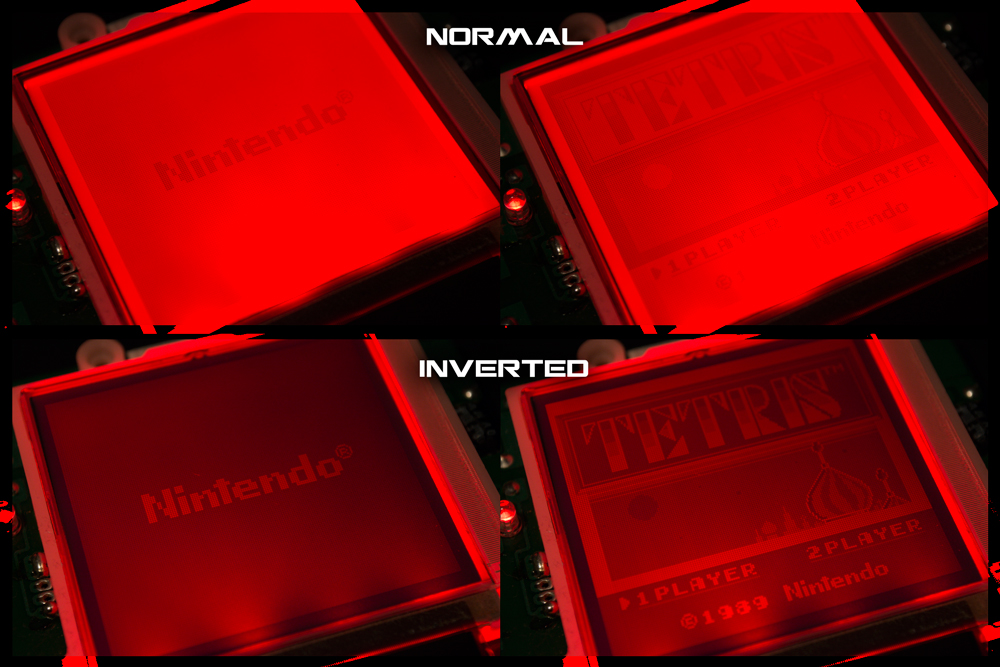 Certain software like LSDJ allows to change the color modes of the program, one is inverted and when using it in an inverted screen, becomes positive but with increased contrast. We will be talking about this technique “Biversion” in another post, hopefully I can show good pictures to see the differences betwen all this screen modes.

I hope you enjoyed it!